Elizabeth Taylor attracted a significant media attention with her eight marriages throughout her life. Out of all her engagement rings collection, the 33-carat D colour diamond engagement ring stood out amongst all. Originally named the Krupp diamond, the diamond was set on a ring as a gift from Richard Burton to Elizabeth Taylor on May 16, 1968. The value of the ring is estimated to be around $2.5 million to $3.5 million. 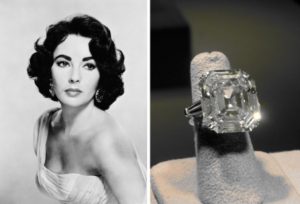 In 1796, Joséphine had received a beautiful Toi et Moi ring from Napoleon Bonaparte to celebrate their engagement. The Toi et Moi (French for “you and me”) ring consists of two pear-shaped gemstones, a diamond and a sapphire, under a carat each, set on a yellow gold band. It symbolizes two souls becoming one. Although their marriage ended within few years, the value of the ring did not fall with it. It was sold at almost $950,000 at auction in 2013.

One of the most iconic blue sapphire rings in history, this ring is designed by Garrard, inspired by Queen Victoria’s sapphire-and-diamond cluster brooch. The ring was first given to Princess Diana in 1981. In 2010, Price William proposed to Kate Middleton, now the Duchess of Cambridge, with his mother’s ring. The engagement ring is mounted with a 12-carat oval blue Ceylon sapphire, surrounded by 14 diamonds, and set in 18 karat white gold. 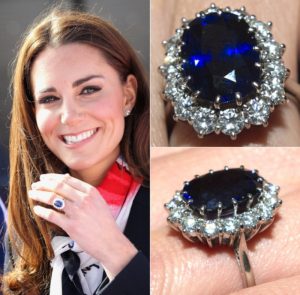 King of Rock and Roll, Elvis Presley proposed to Priscilla with a ring featured a stunning 3.5-carat diamond, surrounded with 20 detachable diamonds. The ring was purchased from Harry Levitch, a jeweller in Memphis. 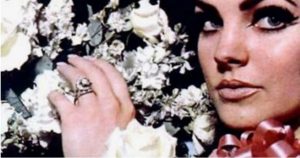 The ring designed by Van Cleef & Arpels was given to Jacqueline from 35th President of United States, John Kennedy. The gorgeous ring consisted of a 2.84-carat emerald-cut emerald and a 2.88-carat emerald-cut diamond, originally adorned with several baguette-cut diamonds and emeralds. The former first lady revamped the design of the ring thereafter and changed the small diamonds to marquise and round shape. 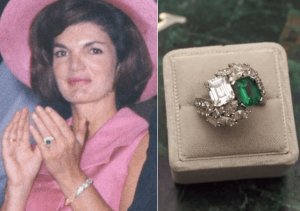 Prince Rainier presented a simple yet sophisticated ring during his proposal to Grace Kelly. Designed by Cartier, the ring features a 10-carat emerald-cut diamond, set in between two small baguette diamonds in a platinum setting. 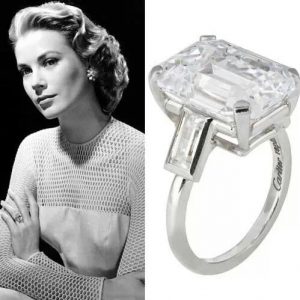 Prince Harry and Meghan Markle have made their debut public appearance as an engaged couple in 2017 and Meghan’s ring has caught a significant attention from public. The ring was designed by Prince Harry, together with Cleave and Company. Mounted with three diamonds in a yellow gold setting, the cushion-cut centre diamond was sourced from Botswana, one of the famous couple’s favourite vacation destinations, while the side diamonds are from his late mother’s jewellery collection. 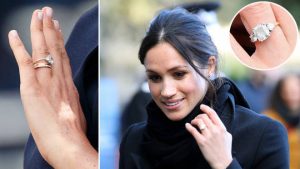 As the power couple in music industry for ages, the net worth of Jay Z and Beyoncé are estimated more than a billion US dollar. It is no surprise that Queen Bey’s engagement ring is one of the highest value engagement rings in the world. The ring features a 24-carat emerald-cut diamond, set on a split shank setting. The ring was designed by the renowned celebrity jeweller, Lorraine Schwartz and anticipated to cost around $5 million in USD.

Another creation of Lorraine Schwartz, the ring was given to Kim Kardashian in 2013. Kanye has gone the extra mile to make sure the diamond was entirely conflict free. The beautiful 15-carat D-flawless diamond ring cost around $4 million in USD. Unfortunately, the ring reportedly stolen in a robbery back in 2016. 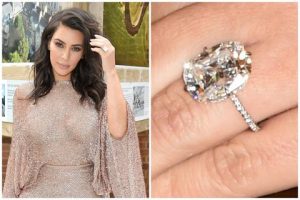 Widely reported as the most expensive celebrity engagement ring, the massive sparkler Mariah Carey received was stated to cost $10 million in USD. The 35-Carat gigantic diamond ring was given by her ex-fiancé, James Packer. The ring was sold to a Los Angeles jeweller in 2018 for $2.1 million after the couple split. 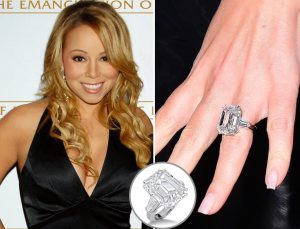