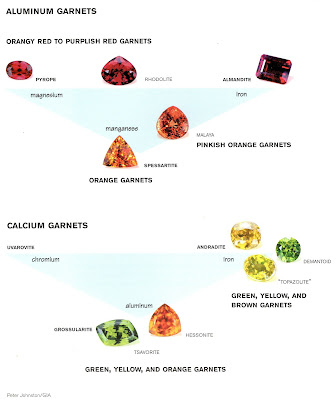 The top triangle represents the aluminum garnets – pyrope, almandite, and spessartite – and the lower calcium garnets – uvarovite, andradite, and grossularite. At each point of each triangle, there’s one garnet species that represents chemical purity. For example, in the top triangle, almandite is a theoretically pure iron-aluminum garnet, and pyrope is a pure magnesium-aluminum garnet. In nature, no garnet is ever pure, and garnet species mix to produce a range of gems with different colours and physical properties.